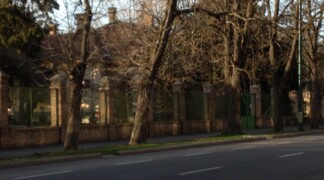 Zubill House as seen from the main street 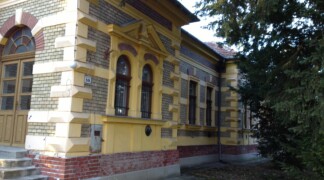 So here is my latest project, its been described as one of the most beautiful and prestigious properties in the town, now renamed as Zubill House situated in a prime position within the diplomatic area, just a couple hundred metre’s from the railways station on one side, and the town centre on the other, and right on the main street that houses the magnificent court house, police station and college.

The house is steeped in history, being first built in 1898 as a house for Lajos Csausz, a well known dignatory and historian, by the renowned architect Joseph N. Szabados, the works of Lajos are housed int he Gyula and Bekescaba museums.  He married Katarina Kiss, but unfortunately died early in 1900.

The house was then sold to the heir , Bodoky Kalman in 1900, a very secretive and respected man, who married the daughter of the town pharmacist, Helen Winkler.  Bodoky Kalman died in 1918, but his wife continued to live in the house until her death in 1948, her family then inherited the house, but is was subsequently nationalized (stolen) by the communist government in 1952.

In government hands it was used as a dormatry for college girls studying horticulture, and in 2002 was offered up for tender by auction.  A local business man purchased the property in 2002 for HUF 30 million (£91000) , however, during the period 2002 to March 2013, when I purchased the property, no work, restoration or decoration was carried out.

The property was valued in its current state of HUF 63 million (£190000), and our initial renovation will revert the property to its former glory, and surprisingly, 10 years of neglect has not shown any signs of structural, roofing or other significant damage, just needs a good clean and decoration.  The estimated value after inital renovation is estimated to be HUF 110 million (£340000).

Please select the menus on the left to track the renovation process, and for further history on the property and its owners.

top
We use cookies to ensure that we give you the best experience on our website. If you continue to use this site we will assume that you are happy with it.AcceptRefusePrivacy policy